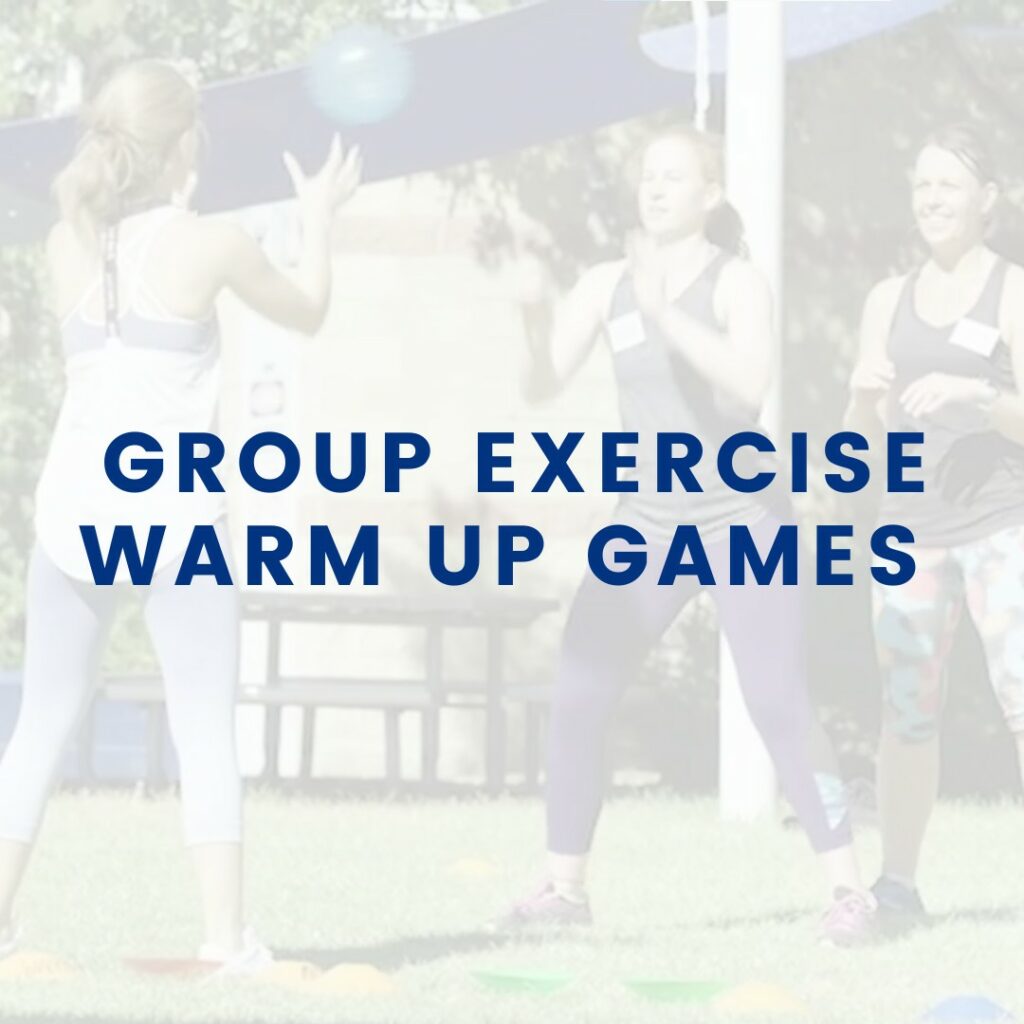 Let’s talk about warm ups shall we?

Of course we are all aware of the importance of looking after our clients and preparing the body for the session ahead, but quite often when planning a workout for my clients, this is the last thing on my mind.

When life is busy, it’s easy to overlook the warm up part of the session and do the same old movements and then just focus on the actual workout, but let’s face it, it can become rather boring for both the trainer and the client day after day.

I’ve been thinking about this a lot lately, why I love being a group PT as opposed to 1 on 1.

To me, the whole idea of training in a group is about engagement and fun. Working alongside others that love the energy of the group to motivate each other to reach their goals.

Each time my clients leave a session, I want them to feel as though they have worked above potential, feel supported, and most importantly, to have had a blast!

So, in light of this, I’ve been playing with exercise games for warm ups to lift the energy from the moment the group is ready to move!

Cue the warm up games! Remembering that games are meant to be fun, I’ve been playing with the following games to see how they land, and so far they have been a hit!

If you try these with your group, and one doesn’t gel, scrap it….fun remember.

Another tip when using these games, play the same game for a week before trying another so they really understand it and can have fun with it. The first time we do anything new can be confusing right? My boys have been teaching me the card game 500 every night for 5 days this week and I am only now picking it up and actually enjoying it! Warm up games are just the same.

I suggest cycling  through the following games I’m sharing below ie.

Then once you have been through them all start back at week 1’s game, and perhaps then throw it over to the group on the final session for the week and ask which game they want to play next week!

What is great about this game is that it’s easy, fun, suits all fitness levels and is engaging.

It’s important that the class instructor leads the game to ensure everyone keeps moving at a good pace and that the people who know each other don’t just pick each other, we want to encourage everyone to get to know each other. You can pick any exercise you like, here we have chosen star jumps.

How – Pair everyone up in a line facing each other. The instructor calls Paper, Scissors Rock, the loser of the game performs 3 star jumps, if it’s a draw they both do star jumps. After 2 – 3 rounds with the same partner, get them to high 5 and have one side of the line move up to the next partner with the person at the start of the line running to the back of the line. Have them introduce themselves to their new partner and repeat 2 – 3 games calling it out faster.

Fun no equipment game that gets everyone having fun and interacting with each other.

A great game that is engaging, interactive, easy, fun and all you need is a towel.

It’s important to keep the groups at no more than 5 – 6 as it gets too challenging for the “it” person to win.

How – Divide your participants into groups of 5 or 6, (if small class numbers 3 -4). The group forms a circle by linking arms. One person is “it” and is outside of the circle. Put a towel around the shoulder of 1 participant in the circle. The person who is “it” has to try and get the towel by pretending to move one way around the circle and then darting the other way whilst the circle moves in a circular motion to avoid the person who is “it” getting the towel.

An easy team building game that only requires a few cones and your strict refereeing skills, to avoid cheating

The game is basically just shuttle runs but because of the turning of cones it’s definitely more interesting. The whole idea is that they make it to the cones and back faster than the other team and only turn one cone at a time.

Try and divide your teams with even fitness levels to keep it competitive and so that everyone has fun!

1 team is “hills”, their job is to sprint to the middle and find a “hollow” cone and turn it into a “hill”.

The other team is “hollows”, their job is to sprint to the middle and find a “hill” cone and turn it into a “hollow”.

When you yell GO both teams shuttle run up to the cones and turn one cone to their favour and then run back to their starting line, they then turn back and repeat turning one cone at a time for 30 – 60 seconds. Whichever team has the most cones turned in their favour is the winner, the losing team will perform 10 reps of pushups or an exercise of your choosing.

To make it a little more interesting, during the second round help the losing team by turning a few cones in their favour, and then on the 3rd round, turn away from the group and let them know they can turn as many cones as they wish in their teams favour but I you turn around and catch them they have to run to a landmark whilst the game plays on.

A super simple game for team building and a whole lot of fun! All you need is a med ball per team.

How – Divide your participants into teams of 5 minimum  – 10 maximum.

Have them all line up in front of each other and name the person at the front of the captain.

The idea is that the groups compete to complete the 2 rounds of tunnel the fastest.

Using a medball, the captain rolls the med ball between their feet to the person behind, then the person behind them rolls the ball between their feet to the person behind and so on until the ball reaches the last in the line. The last in the line then picks up the ball and runs to the front and repeats the tunnel. Repeat until the captain has run from the back to the front twice and have the team sit down as soon as they have completed the rounds, the first to sit down wins. The losing team is given x amount of reps of an exercise of your choice.

A great team building game for coordination and speed that suits all fitness levels and just a few basketballs required.

How – There is no perfect number for captain ball but ideally 5 – 10 participants per team.

Name a captain per team and have them spaced roughly 4 – 5 metres away from their team who are lined up behind each other with the captain facing the first in line.

Repeat until all participants have been in the captain position and reached the end of the line and then immediately sit down to signal they are finished. The losing team then performs x reps of the instructor’s choice of exercises.

If you have a team that is crushing the other teams, even up the playing field by knocking the ball out of the way, or making a “no leg hits rule” if the ball hits their legs the whole team does 5 star jumps.

About The Author: Jono Petrohilos
Online Course Creator I 2020 Fitness Australia Educator of the Year

Recent Post
Supporting the Bigger Client
Boxing Workout for Bootcamp 15, 30, 45, 60
Boxing Workout Ideas for Bootcamp: “The 2-10’s”
How To Structure a Boxing Workout for Bootcamp
“Exercise Considerations for the Bigger Client”… Health and fitness at any size
Should Women Stop Lifting Heavy Weights During Menopause?
Boxing Circuit Workout Ideas: The “Punch, Run, Bodyweight”
Boxing Courses for Personal Trainers: Should you do one?
How to Become a Highly Profitable Rent based Personal Trainer in 2022!
One Arm Kettlebell Row: 5 of The Best Variations Available
To weigh or not to weigh? Should Trainers Ditch The Scales Once and For All?
5 Questions every Fitness Professional should be asking their female clients... (especially when aged 37+)
How to run a 30 Day Plank Challenge… Sub30 Style!
How to Help Female Clients Work With Their Hormones
10 Steps To Launch Your Fitness Coaching Business Online
SEO for personal trainers
1 2 3 … 76 Next »